Very interesting commission in May. Our client is a geologist who wondered if we had any experience of working with raw gold. He recently completed a PhD in geology that specialised in the formation of placer gold (placer gold is found in water/streams/river beds and you use a pan to sift out the gold – like in the old films).

He wanted to use some of his collection of gold to make his and his wife to – be wedding rings. He had collected the gold in Scotland, Canada and Wales, when he brought the gold it was in phials and looked like black sand. There were a lot of other minerals and debris in with the gold which we needed to burn off before we could see how much gold there was. The addition of other elements created a challenge, as the gold melted and we formed it into an ingot it kept cracking so needed to be re-melted several times.

Eventually we managed and two beautiful warm yellow coloured gold bands were produced. We were a bit nervous about having them hallmarked. If there had been no other metals or minerals in there they would have been hallmarked at 999 which is pure gold and 24ct but it wasn’t possible to remove all of the parts that weren’t gold so they were hallmarked as 750 which is 18ct. Quite a romantic journey from the bottom of a river bed to the symbol of eternal love.. 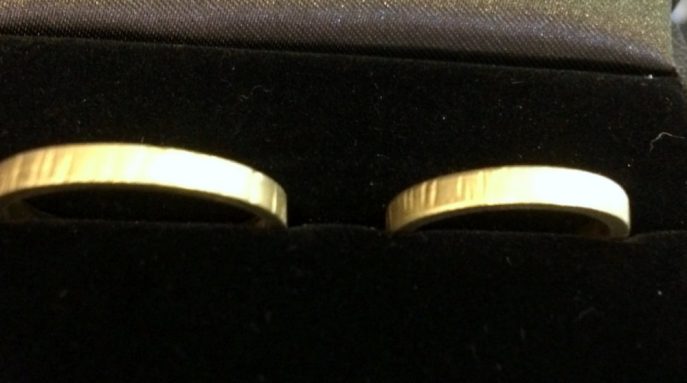 Handmade Gold wedding rings hallmarked as 750 which is 18ct.